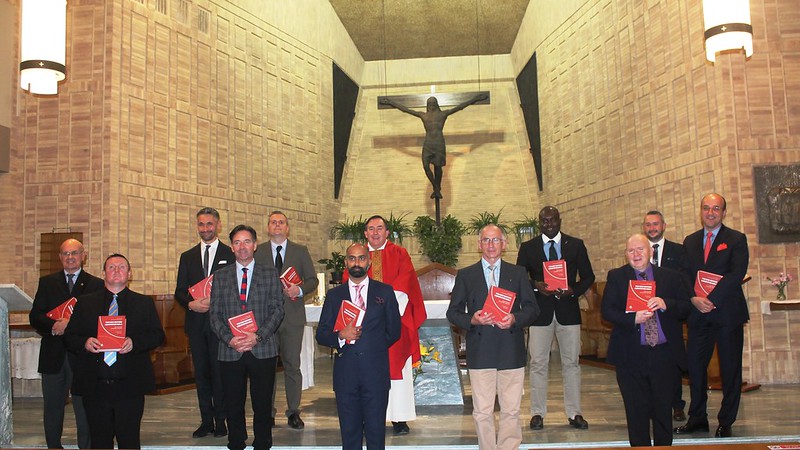 News after a long period of radio silence! Due to travel restrictions both ends I have decided to spend Christmas in Rome: I am quite ok with that, although I will miss being home. A lot of us will be here so I shan’t miss company. I wish you a happy and blessed Christmas season.

Here they are being very strict as we shan’t be allowed even to leave Rome for other parts of Italy. The 10pm curfew is not lifted at all, even on New Year’s Eve, so “Midnight Mass” will be said early. The government and media keep saying “You will be able to go to Mass,” which you would never hear in the UK, they are sort of encouraging you to go! At the end of the first lockdown Giuseppe Conte, the prime minister, even said “We must find a way of ensuring the faithful can receive the sacraments,” something that a UK politician would never let pass their lips.

There are so many wonderful churches here, with beautiful art, and so many tombs and relics of martyrs and saints that it is difficult not to be moved when visiting them. Even if the various styles of art are not to your taste, the mind inevitably asks what is that all about, what story is that, and sometimes you find yourself praying before some image or painting quite spontaneously.

This week we were blessed to have a Bank Holiday on Tuesday for the Immaculate Conception: at Mass the night before the Rector said for the Italians it means a day “Of peace, love for Mary and getting ready for Christmas.” Indeed, the most wonderful cribs have now sprung up – they show a whole imaginary town; the seminary one has, for example, a baker putting his bread in the oven, butchers, workmen, housewives etc. Last year the Three Wise Men appeared on a distant windowsill, moved a little every day, and only got to the crib on January 6th – Epiphany is also a Bank Holiday here.

The shops were shut, and it was indeed a peaceful and restful day for us and a break from lectures – though the Pope had a busy day.  Very early he went to crown the statue of Mary on the column at the Piazza di Spagna – actually the Fire Brigade does it for him – and then said Mass in St Mary Major.

They also released the letter he wrote dedicating the next year to St Joseph. Here is the link to the letter, it is well worth reading and not too long:

For the Immaculate Conception I just went to Mass in the basilica over the road – it is a great privilege to be able to pray at the tomb of St Paul.

As they read the epistle at Mass (Ephesians 1:3-12) I reflected that the writer was buried nearby, under the High Altar. I think there is some divine providence in this: my middle Christian name is Paul, they sent me to St Paul’s in Dover, and now I am by the Apostle’s tomb in the Basilica of St Paul Outside the Walls. I often go there and pray for all those I should – and I include you in Welling – and ask for his intercession. Of course, being next to his tomb has disadvantages too, in the form of mosquitoes. We are about a mile from the city gate on a bit of marshy land by the river – an ideal place for Roman capitalists to use as a cemetery. Money from cheap land otherwise not likely to get a high rent. (There is nothing new under the sun!) Well, at least the mosquitoes aren’t a nuisance from November to April.

From here it is 3 kilometres to Tre Fontane (Three Fountains) where St Paul was beheaded; there is a Trappist monastery, and it is a peaceful beautiful place.  Although you are in the suburbs of Rome you could been in the countryside.

As for the studies, last year went well: the most difficult is Philosophy whereas the Biblical studies are much more familiar. We have been studying the Church Fathers and Grace, and practising preaching. At the end of October our year received the ministry of Lector, the first step to priesthood.  There are many more to go!

Well, may God grant you a blessed and peaceful time this Advent and Christmas.

(Front row, far right in the photo at the top)