On March 29th next, England is to be rededicated as Dowry to Our Lady by the Bishops of England and Wales in conjunction with the entire Church of these two countries. To that end it is proposed that each of us should make a personal Act of Consecration to Jesus in Mary on the feast of the Annunciation and to prepare for that by following the method of St Louis Grignion de Montfort as simplified by Fr Michael Gaitley in the booklet, 33 Days to Morning Glory – a do-it-yourself retreat in preparation for the Marian Consecration. The booklets will be available at no cost.

Preparation began in June 2018 with the Dowry Tour of the statue of Our Lady of Walsingham visiting all the Catholic cathedrals of England and Wales finishing at Westminster Cathedral on 19-21 March 2020.

We are all invited to begin a personal thirty-three day retreat on 21 February and make our personal consecration on the feast of the Annunciation, 25 March. There will be a triduum of prayer 25, 26, 27 March leading up to Sunday 29th for the formal rededication.

This is a very important initiative of great significance for the future of England. It is therefore right that we should try to understand all that this entails – the significance of the terms ‘dowry’ and ‘consecration’; and who St Louis was and what he taught.

The Dowry of Mary

That England is the Dowry of Mary is a long held belief. The word ‘dowry’ is commonly understood as the endowment provided by parents to their daughter on her marriage. But in medieval England it was the custom for a husband to set apart a portion of his estate for the maintenance of his wife should she become a widow. The historical understanding of England as ‘Mary’s Dowry’ is that England has been set apart for Our Lady.

Historical evidence shows that the cult of the Virgin was an important aspect of Anglo-Saxon spirituality and flourished from the 7th to 9th centuries. To refer to the Blessed Virgin Mary as ‘Our Lady’ was first used in England by an Anglo-Saxon poet at the end of the eighth century.

Though it has been suggested that the title Dowry of Mary originated from the reign of St Edward the Confessor (1042-66) there is no firm evidence to support that belief. By the middle of the 14th century its use had become widespread.

King Richard II dedicated England to Our Lady in a ceremony at Westminster Abbey on 15th June 1381, the feast of Corpus Christi, as an act of thanksgiving for the preservation of his kingdom from the Peasants Revolt and the events at Smithfield by making the following proclamation:

This is your Dowry, O Pious Virgin Mary.

Thus England belongs in a special way to the Blessed Virgin, who is the country’s patron and guardian. In 1399 Thomas Arundel, Archbishop of Canterbury, wrote:

The contemplation of the great mystery of the Incarnation has drawn all Christian nations to venerate her from whom came the first beginnings of our redemption. But we English, being the servants of her special inheritance and her own dowry, as we are commonly called, ought to surpass others in the fervour of our praises and devotions.

The Dowry of Mary is thus a title of England, established by a Royal act and proclaimed by an Archbishop of Canterbury; a title which has never been rescinded by either the Sovereign or by Parliament. It was confirmed by Pope Leo XIII in 1893 in a letter to the English Bishops. 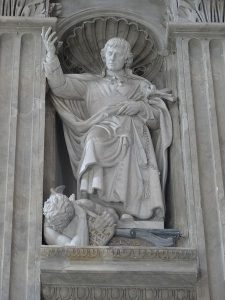 Louis Marie Grignion was born 31 January 1673 in the town of Montfort-sur-Meu, near Rennes in Brittany, son of a farmer and eldest surviving child of a large family. As a teenager he felt called to be a missioner and developed a strong devotion to the Blessed Virgin.

Leaving school he was given the opportunity to study at the Seminary of Saint-Sulpice in Paris. He was ordained a priest in June 1700. He took up a post as chaplain to the Hôpital Général in Poitiers – a work-house for the poor. Eventually he was to become its Director. He was joined there by Marie-Louise Trichet and Catherine Brunet, and in the course of time these two were to become the first members of the Daughters of Wisdom.

His efforts to reform the Hôpital attracted much opposition and so left to begin preaching missions in and around Poitiers especially to the poorer parishes. At last he felt he was doing the work God had called him to do. He put into practice many of the features of his later missions: the call to a renewal of Baptismal Vows, the processions and lively liturgies which attracted the people who had often been neglected in the past. But his success seems to have aroused the jealousy of some who had the ear of the Bishop and at the beginning of Lent 1706 he was forbidden to preach any more missions in the Diocese of Poitiers.

Feeling a need for higher guidance, he set off to Rome, to ask the Holy Father, Pope Clement XI, what he should do. The Pope recognised his real vocation telling him that there was plenty of scope for its exercise in France, sent him back with the title and authority of Apostolic Missionary.

Thereafter he was involved in many missions choosing the poorest areas of the towns and would introduce some new initiative for the relief of the poor, such as a soup-kitchen. His missions proved extraordinarily successful and his reputation as a great missioner grew.

He tried to perpetuate the spiritual results of his missions by setting up confraternities and associations which would encourage the people to be faithful to their renewal of Baptismal commitment and by erecting physical reminders of the mission in the form of mission crosses.

He was extraordinarily busy, constantly occupied in preaching missions, always travelling on foot. Yet he found time to write his True Devotion to Mary, The Secret of the Rosary, Love of Eternal Wisdom and many hymns. Yet he found it very difficult to persuade other priests to join his ‘Company of Mary’. Finally, in his last year, two priests, Fr René Mulot and Fr Adrien Vatel, and a few lay-brothers did join him in his work.

The Bishop of La Rochelle proved a great friend and with his help established free schools for the poor boys and girls of La Rochelle. Louis Marie called on Marie Louise Trichet and Catherine Brunet to come and join him in this work. These two good women made their religious profession and the congregation of the ‘Daughters of Wisdom’ was born.

In 1716 he fell ill and died on 28 April, aged 43. Thousands gathered for his funeral and soon there were stories of miracles occurring at his tomb.

Louis Marie Grignion de Montfort was beatified in 1888 and in 1947 Pope Pius XII declared him a Saint. The congregations he left behind, the Company of Mary, the Daughters of Wisdom, and the Brothers of Saint Gabriel grew and spread, first in France, then throughout the world. They continue to witness to the charism of St Louis Marie, and to carry out his mission to establish the Kingdom of God, the Reign of Jesus through Mary.

The Spirituality of St Louis Marie

Against a background of the Protestant Reformation beginning in 1517 followed by the Counter Reformation and the Council of Trent (1545–63), Pierre de Bérulle (1575–1629) priest, cardinal, statesman and mystic initiated a reform movement characterized by a deep sense of God’s grandeur and of the Church as the Body of Christ that had a strong missionary commitment which served to re-animate the church in France. A hall mark of this French School of spirituality was of a mystical journey through Mary to Christ, and through Christ to the Holy Trinity.

In 1641 Jean-Jacques Olier, a follower of this movement founded the Séminaire de Saint-Sulpice in Paris for the better formation of priests as required by the Council of Trent. It was in this climate that Louis-Marie’s priestly formation and spirituality developed.

Montfort was the last of several leading exponents of this spirituality each of whom added their own emphasis. Louis-Marie proclaimed that everything was to be directed to God alone. He recognised the fundamental importance of the incarnation, passion and death of Jesus as a manifestation of the Wisdom of God. He had a great devotion to the Mother of Jesus and her role in our redemption. That the Son of God should become totally dependent on this particular woman was to be an example for us to emulate.

In imitation of Jesus, Montfort chose to preach his missions to the poor and deprived. To instruct them in the faith, he explained the meaning of their baptismal promises leading them to a renewal of those vows.

Bérulle had formulated a vow of servitude to Mary which Louis-Marie developed as a devotion to the Blessed Virgin consisting in a total giving of ourselves to Jesus in Mary as their slaves, thus enabling us to enter into a more intense union with Jesus. It is a holy and voluntary slavery. This ‘consecration’ is a solemn commitment of one’s life to Jesus in Mary which we are encouraged to make in preparation for the Rededication of England as Dowry of Mary next March.