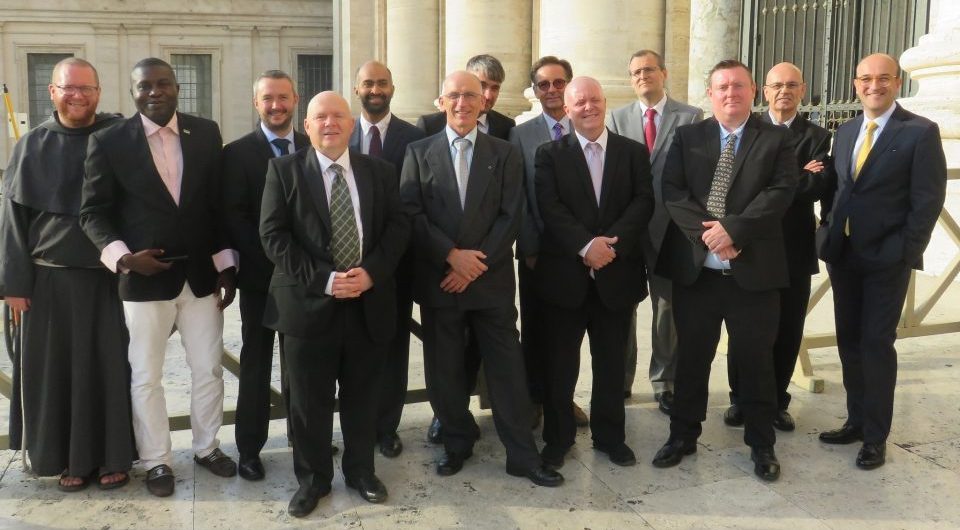 Gwen has asked me to write something about my doings at the Beda seminary in Rome.  As you may know I left Welling in September 2018 to spend a year as a Pastoral Assistant in Dover before going to the seminary.  Dover remains my UK base as my flat in Welling is now rented out.  I am really blessed to have Father Jeff Cridland as parish priest. Some of the older parishioners in Welling will remember him from his spell in Welling at the end of 1995.

​I won’t pretend that going to seminary at the age of 60 is easy: having to adapt to the community lifestyle, having to study again, a lack of control over some things, is difficult for all of us here. At times it feels like I am 15 again (minus the trauma of puberty).  I have just finished off the first set of exams – 8 of them, and have completed three essays.  The topics have been on such things as “Faith, Reason and Revelation in the writings of St Justin Martyr.”  Well, I have survived and hopefully have learnt something.  Actually, I feel that the academics are not the most important thing; though they are important, the whole process seems like the church is taking its time to see what sort of people we are and if we are suitable.

​We were taken to the catacombs under St Peter’s – the Scavi, which means Excavations carried out on the orders of Pius XII in the 1940s – where there is a whole street of Roman tombs under the church, then you see St Peter’s tomb under the High Altar.  His bones are in a sort of glass box with a light shining on it, but of course it is too far away to reach and steal, with a big void and drop in between.  Then you go up some more steps and emerge by the High Altar right under the dome into the church, which is crowded with tourists blissfully unaware of what lies just beneath their feet.

The Beda seminary is just opposite the Basilica of St Paul’s Outside the Walls, where St Paul is buried underneath the High Altar in the same way. I often wander across for a quick prayer. The Pope came there for Vespers on the 25th January, the feast of the Conversion of St Paul, to celebrate the end of Christian Unity Week. He is getting old and seems to be in pain when he is walking; he had a long walk up the aisle as the church is enormous. When he walked out at the end of the service he walked more easily, but then he had been sitting for the better part of an hour – when you are Pope you can send a deacon to incense the altar for you.  They tell the tourists that only the Pope can preside at this altar, but I have seen a Cardinal say Mass there as well as the deacon incensing, so they should really say only with papal permission!

This week Querida Amazonia was issued by the Pope and the media were in a frenzy over the possibility of married priests but our Rector – who seems to know some of the Vatican gossip – said at the most there would be a commission to look into the matter. However, since the Pope chose not to set up a commission and left the celibacy rules as they are, I suspect the media-hype about a possible change in the rules was because of the usual anti-Catholic prejudices and profound ignorance on faith issues. I suspect that for the same reasons they  also wrong about the supposed row between Pope Francis and his predecessor Benedict.  In fact, they are both on record for saying the same thing on the matter of priestly celibacy so I doubt there was any sort of row at all, except in the minds of certain journalists.  Pope Francis has made it clear, on several occasions, he does not think he has the authority to allow women priests either, so I wonder why the ill-informed media keep pretending he just might.  In truth they are ignorant in matters of religion and cannot shake off the secular mindset.

You could also look at this about the basilica over the road and St Paul’s tomb.

(The one with the crisscross tie in the photo above)