The biblical and historical roots of the Papacy trace back to the dawn of Christianity. In this article, I plan to provide a biblical defence of the Papacy, by unpacking Matthew 16 through the lens of Isaiah 22.

“And I tell you, you are Peter, and on this rock, I will build my church, and the gates of Hades will not prevail against it.” — Matthew 16:18

Not only is Peter given a new identity, but Jesus reveals how God’s plan for the Church would be fulfilled through him. Peter means ‘Rock’. In Aramaic, Jesus would have literally said “You are the Rock (Kepha) and upon this rock (kepha) I will build my church,” emphasising how Peter would be the central foundation for the Church as the Bishop of Rome.

In Caesarea Philippi (modern-day Banias) there existed a massive rock formation, upon which pagan temples were built for the Roman Empire. The Romans would offer sacrifices to the false god Pan (the god of sheep and shepherds). As the true and good Shepherd, Jesus took His disciples specifically to this pagan region to visually demonstrate how He would establish Peter as the new true Rock upon which the new true Temple would be built, for the worship of the one true living God. The rock not only established a new Church but a new Covenant and a new priesthood.

“This is the church of the living God, which is the pillar and foundation of the truth.” — 1 Timothy 3:15

At Caesarea Philippi, the Cave of Pan was believed to be so deep it would lead to the gates of Hades. As a result, Jesus promised Peter that the Church established on him would prevail until the end of time and would not be destroyed. The Catholic Church can trace its line of bishops and priests to St Peter (the 1st Pope), due to the unbroken chain of apostolic succession. Thus, the Catholic Church can claim that it was apostolically founded by Jesus Christ and not merely man.

“Let no one do anything of concern to the Church without the bishop… Wherever the bishop appears, let the people be there; just as wherever Jesus Christ is, there is the Catholic Church” – (Ignatius of Antioch – 110 AD).

In the Davidic Kingdom, when the King was away, the Royal Steward would be left in charge and would carry these massive keys over his shoulders, to represent his authority. Similarly, in Jesus’ Kingdom, Peter was given the ‘keys of the Kingdom’, a direct reference to Isaiah 22, which describes the office of the Royal Steward.

“On that day I will call my servant Eliakim son of Hilkiah and will clothe him with your robe and bind your sash on him. I will commit your authority to his hand, and he shall be a father to the inhabitants of Jerusalem and to the house of Judah. I will place on his shoulder the key of the house of David.” — Isaiah 22:20-24

Keys represent exclusive dominion. In Greek, the word ‘you’ is singular, indicating that Jesus did not give everyone the keys, but rather set Peter apart to lead His Church on Earth. The word ‘Pope’ derives from the Italian word ‘papa’. Since the Royal Steward was the Father of Jerusalem, the Pope is referred to as the Holy Father.

“Our apostles knew through our Lord Jesus Christ that there would be strife for the office of bishop. For this reason… they appointed those who have already been mentioned and afterwards gave instructions that when these should fall asleep, other approved men should succeed them in their ministry.” – (Pope Clement I – 70 AD).

When Peter died, the keys were passed on to his successor Linus, who passed on the keys to Anacletus and then onwards to Clement. Pope Francis is now the 266th Bishop of Rome to receive the keys and this line of succession will only end when the keys are handed back to Jesus upon His Second Coming. 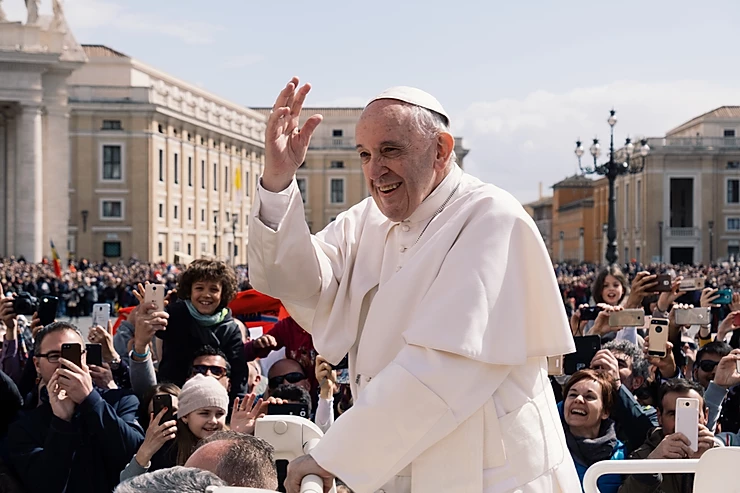 The Power To Bind And Loose:

‘To bind and loose’ simply means to have indisputable authority to permit or forbid something. In the case of Peter, the keys entrusted him with the power to govern the House of God and make doctrinal judgements.

“If the member refuses to listen to them, tell it to the church; and if the offender refuses to listen even to the church, let such a one be to you as a Gentile and a tax collector. Truly I tell you, whatever you bind on earth will be bound in heaven, and whatever you loose on earth will be loosed in heaven.” — Matthew 18:17-18

The authority of the Church is further emphasised by Jesus, as being the ultimate authority on matters of dispute. The similar authoritative role of Moses in the Old Testament can be applied to Peter in the New Testament.

“When they have a dispute, they come to me and I decide between one person and another, and I make known to them the statutes and instructions of God.” — Exodus 18:16

According to Jewish Tradition, when Moses came down from Mount Sinai with the 10 Commandments, he had the written Word of God on the Tablets, the Oral Tradition (613 Mitzvot) and Teaching Authority. Similarly, in Catholicism, authoritative value is placed equally on Sacred Scripture (the Bible), Sacred Tradition (Apostolic Oral Traditions) and the Magisterium (consisting of the Pope and Bishops) to teach and interpret Scripture accurately.

“So then, brothers and sisters, stand firm and hold fast to the traditions that you were taught by us, either by word of mouth or by our letter.” — 2 Thessalonians 2:15

“The scribes and the Pharisees sit on Moses’ seat; therefore, do whatever they teach you and follow it; but do not do as they do, for they do not practice what they teach.” – Matthew 23:2-3

Though they were hypocrites, Jesus told His followers to obey the teachings of the Jewish leaders because they sat on the Chair of Moses, otherwise known as the ‘Cathedra’. Similarly, this 3500-year-old tradition continues as the Pope now sits on the Chair of Peter. The writings of the Early Church indicate to us that being in communion with the Pope was mandatory to being part of the Church that Jesus Christ established.

“On him [Peter] he builds the Church, and to him he gives the command to feed the sheep [John 21:17], and although he assigns a like power to all the apostles, yet he founded a single chair [cathedra], and he established by his own authority a source and an intrinsic reason for that unity. Indeed, the others were also what Peter was [i.e., apostles], but a primacy is given to Peter, whereby it is made clear that there is but one Church and one chair… If someone does not hold fast to this unity of Peter, can he imagine that he still holds the faith? If he [should] desert the chair of Peter upon whom the Church was built, can he still be confident that he is in the Church?” – (Cyprian of Carthage – 251 AD).

Written 150 years before the Bible was compiled, the primacy of Peter and his successors was a key symbol for unity in the Early Church. It distinguished the first Christians from the heretical sects which emerged. As the fulfilment of the Royal Steward in Isaiah 22, the Pope is the peg which holds the Church together.

“I will fasten him like a peg in a secure place, and he will become a throne of honour to his ancestral house. And they will hang on him the whole weight of his ancestral house, the offspring and issue, every small vessel, from the cups to all the flagons.” — Isaiah 22:23-24

When priests celebrate Mass, they offer the one eternal sacrifice of Jesus to the Father when they consecrate the Bread and Wine into the Body and Blood of Jesus Christ in the Eucharist. The cups and flagons highlight the Royal Steward’s priestly role in offering sacrifices. Only priests could pour blood, in the same way that only a validly ordained Catholic priest can pour out the blood of Christ for their congregation. Thus, through the Apostles, Jesus established a new priesthood.

“One among the Twelve is chosen so that when a head is appointed, there may be no occasion for schism.” – (St Jerome – 393 AD)

Jesus’ Kingdom is not an invisible Kingdom but a Kingdom with a visible structure and hierarchy. With the Pope as His appointed representative on Earth, Jesus established His One, Holy, Catholic and Apostolic Church and promised that it would be this Church that would prevail to the end of time.