Duty, decency, reliability, honour, dignity, respect: these are all qualities that Ron not only held in high esteem, but practised every day during his time on this earth.

He saw a lot during his lifetime. Born into a world at war, his childhood was spent in an uncertain world, influencing his views on the post-war world in which he himself grew up and later raised his own family. He called his school Colditz, as he hated it so much and couldn’t wait to escape.

Ron had a variety of jobs which utilised his engineering talents, including working at times on submarines and tanks. Ron lived in and around Welling all his life. He met Jean at a dance, marrying her aged just 22, and showed his romantic side by taking her on a honeymoon up a tree, on a motorbike… not sure how that worked but it must have impressed as they remained happily together for the next 58 years.

As many young men do, he dreamed of being in a band. So, he formed the JC Dominoes with his brother-in-law John (Vine) which went on to become the Shoremen when two other members joined. The band was very popular for local weddings and venues, with a good repertoire – as long as Ron didn’t sing too loud! 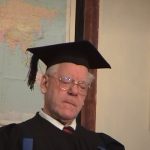 When free of his parental responsibilities, Ron would immerse himself in his many DIY jobs or the Drama Group. He loved his drama, especially when he got to play the Dame… he even managed a bit of improv once by putting out a real fire whilst on stage. Even when not on stage, Ron’s presence was always evident in his brilliant artwork, mostly visible in the detailed and very accurate back-drops he designed and painted with a little help from the crew.

As a father of four though, he was often happiest when left to his own devices – whether it was tinkering with clocks, tending to the garden, or anything to do with Steam Trains. He loved nothing more than immersing himself in the golden age of steam for some much needed relief and relaxation. When the leisure days of retirement opened up for him, he built his model railway by collecting trains and painstakingly building houses and scenery.

As a youth he loved to play rugby but, as a senior, bowls took his fancy until his illness stopped him. Ron lived a long and happy life; his goal was to get to 80 which he achieved, only succumbing to ill health at the end. He was an imposing figure of a man, a character that filled a room, whose reassuring presence we all felt during difficult times.

The Family of Ron Baxter

A Long Journey of Faith

Despite Ron’s long association with St Stephen’s, he was only baptised into the Catholic faith at Easter 2019. He was interviewed for “Living Water” on 22 June 2019, so this is his faith journey in his own words.

When I was a lad, my mother sent me to Sunday School at St Mary’s, Shoulder of Mutton Green in Welling—the old church as it was then. I became a King’s Messenger, which meant joining the SPG: the Society for the Propagation of the Gospel (a Church of England missionary organisation). From this I learnt not to waste food etc. I partly joined as I was creative and good with my hands. I enjoyed making baskets out of raffia, knitting, embroidery and so on. We also made raffia calendars and sold things at bazaars.

When I was 14, I was confirmed, just before the new church opened. After that I took the sacraments every Sunday. I was quite deeply religious at that time; I felt I could give my life to God at that stage in my life, but that feeling wore off.

At 16 we all got jobs and drifted apart. I drifted away from the church as I was no longer seeing my friends at church. I didn’t have the commitment to keep my faith going. My parents weren’t religious at all—they had just sent me to church as they felt it was the right thing to do, but they never came with me. My father wasn’t even christened.

Being creative, I have always been a bit of a rebel with something of a free mind. I wasn’t an obedient child and hated authority. I used to think the best day of my life was the day I left school. I didn’t believe what people told me. I did believe in God, but wanted to do it in my own way. I saw no need for hard discipline which held me in. I was afraid of authority. The King’s Messengers were a friendly bunch, but I didn’t join other clubs as I resisted discipline. Perhaps it would be more accurate to say I wanted to believe in God, but didn’t really.

I first met Jean when I was 14, but we didn’t go out seriously until I was 18. I went back to her as she didn’t try to change me as other girls had done. We have now been happily married for 58 years. Jean was a cradle Catholic who went to St Stephen’s, and I had to take lessons with the priest before marrying her. It was Fr Jones (from Woolwich) who was assistant priest at the time, who married us and gave the lessons. But he fell ill before I had got very far along the road to conversion, so I gave up and drifted away from the idea.

After a few years I went to another priest at St Stephen’s—I don’t remember his name—but something happened again to interfere with the lessons, so I decided that God wasn’t ready for me.

Then in 2012 I got cancer, which makes a difference. I started to feel differently about church. I would go along to Mass with Jean now and again, but I felt left out at the sacraments. I thought, that’s the point of going to church, I need the sacraments.

By this time I had learnt from discussions with my in-laws and friends that the RC church was the really true church, in a true line from God, the church handed down through the apostles. My brother-in-law John and his wife Freda have been a great influence in my faith journey. I played in a band with John when we were young, then he invited me to join the drama group at St Stephen’s. I played the dame in pantomimes for 30 years, and was pretty good at it! People began to think I was an RC as they kept seeing me about the place, and so gradually I felt I was being called to it.

Then last autumn Canon Edward came along and I felt somehow drawn to try the lessons again. I asked him if I could join on a Thursday evening, and of course he agreed. I learnt a lot. I didn’t want to do the lessons just because I had cancer. I needed God but I also felt I wanted to be close to Him. The lessons made me realise the gaps in my religious education. For instance, I didn’t know about mortal sin before. I realise now that I wasn’t respectful to my parents and had been self-centred in the past. I was born in 1940 so Dad was away in the army when I was little. I had Mum all to myself until my brother was born when I was 3½, and then I was really jealous of him as he came between Mum and me. We are the best of friends now, though.

I would like to conclude by saying that, having decided to become a Catholic, I have been amazed at how welcome I have felt. I feel I have joined the right family.

Please click here for Canon Edward’s reflection during these testing times with psalms to pray.