St Stephen’s parish is proud to congratulate Fr Joseph Gulliford who was ordained by Archbishop John Wilson at St George’s Cathedral on Saturday 16 July, along with two other men who had been studying for the priesthood with him.  Joseph grew up in the parish and attended St Stephen’s Primary School along with his brother and sister.  His parents, Gillian and Charlie, are still parishioners.  Those from the parish who were able to attend the magnificent ceremony found it a very moving occasion; in most cases it was the first ordination we had attended, and a very special experience to queue up for a blessing from such a newly ordained priest. 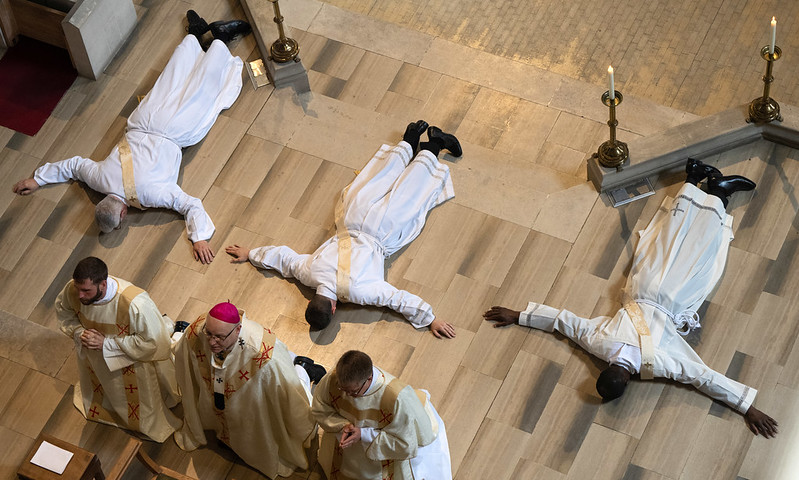 Joseph studied for six years, mostly at St John’s Seminary, Wonersh, which  sadly had to close last year due to the lack of vocations.  For his fifth year, during lockdown, he was based at St Edmund’s Church, Beckenham where he regularly led reflections and used his musical talents.  Being well known in the parish, he arranged to hold his first Mass there on Sunday 17 July.  This was a joyous occasion which was concelebrated by a number of priests and attended by family, friends and parishioners.  Joseph’s brother Daniel ably led the music, including half an hour of praise and worship before Mass.

Before Joseph’s ordination he was asked to write his reflections on being ordained for the diocesan website:

It is difficult to put into words how I am feeling on the brink of Priestly Ordination. In truth, I have many mixed feelings.  I have found myself often recalling the past, all that has led me here, while also thinking ahead to what life as a Priest will really be like. One thing remains at the deepest level – a yearning to simply walk forward and accept.  Accepting God’s will is often both incredibly easy, for when we do it He does the heavy lifting as we embrace and trust Him, and incredibly hard, for there always seems to be some kind of resistance in our will – clinging on to control and curiously over-pondering that question what if?  Another question I can think too much about is am I ready?

I am not ready or worthy by any measure of skill or preparation or by my own volition, but I am ready to say yes and I am ready to accept.  Our Lady’s fiat speaks powerfully to me right now.  This ‘let it be done’ is completely disempowering but at the same time abundantly grace-filled and enlightening.  Such is the step of surrender, the necessary death that leads to life.  I say to the Lord ‘here I am’.  On my prayer card I have chosen an icon of Christ the High Priest, something that touched my heart at an Ordination in my first year in Seminary.  For to Him belongs the Priesthood and all it entails.  Still, He is willing to give this gift to someone like me.  So on my prayer card I have also written that “My grace is sufficient for you, for My power is made perfect in weakness” (2 Cor 12:9). “Glory be to Him whose power working in us can do infinitely more than we can ask or imagine…” (Ephesians 3:20-21).

Joseph will start his work as a priest at St Thomas More’s Church, Dulwich, in September.  Please keep him in your prayers. 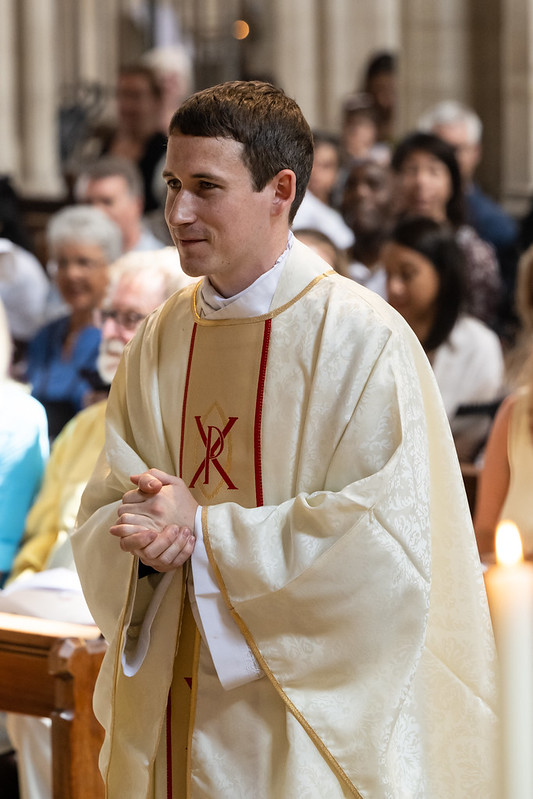 To view more photos, please visit Ordination to The Priesthood for Archdiocese of Southwark | Flickr.