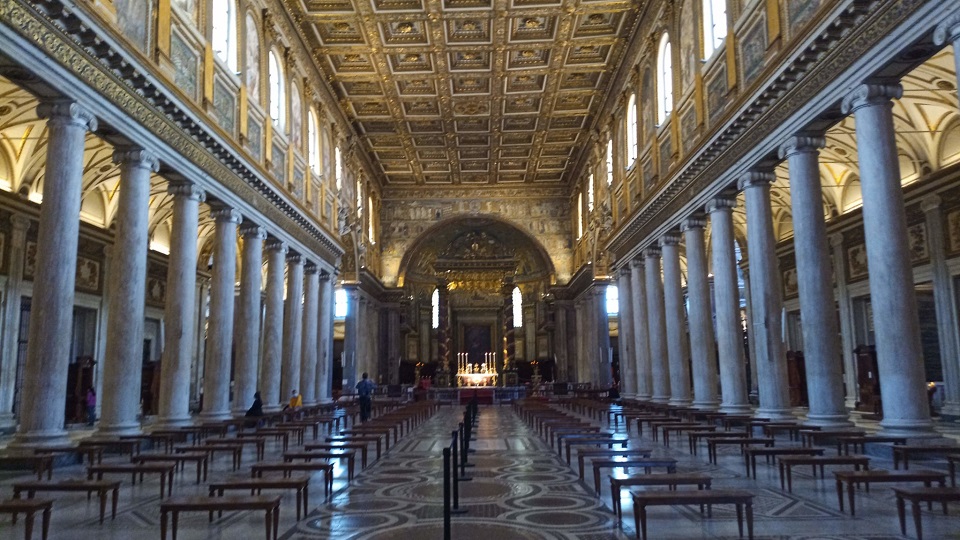 Andrew Bishop, a seminarian from St Stephen’s studying at the Beda College in Rome, has written this article detailing a pilgrimage he took part in on Spy Wednesday (in Holy Week).

Among the Holy Week traditions in Rome, one which is embraced by members of the Beda College is the Seven Churches Walk. A group of Beda students normally undertake this pilgrimage on the Wednesday before Easter. In 2020, due to the lockdown and pandemic, the Walk had not taken place at all. This year, in the weeks before Holy Week, when Lazio was in the “Red Zone,” it seemed likely that for the second year in a row we would be “confined to barracks.” We already knew that the Easter weekend itself would be red. To everyone’s relief Speranza, the Health Minister, announced on the Friday before that Lazio’s Covid-19 figures had improved just enough for us to be in the Orange Zone and thus allowing the walk to take place.

So, we gathered in the chapel for the Rector’s blessing and were delighted to be on our way. The day dawned bright and sunny, and so it remained – not too hot or too cold, but just right like Goldilocks’s porridge. After all the days we had spent cooped up in the seminary this felt indeed like a blessing and a grace, to be out in the fine weather in this wonderful city, taking in the sights and breathing the fresh air. 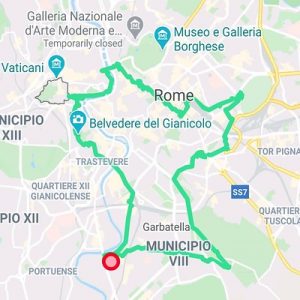 Many went “the wrong way round,” so as to be able to visit San Lorenzo while it was open in the morning.  Some improved on tradition by using their bicycles rather than walking, and a little bird tells me that some of the house even caught a bus or the metro to go some of the way.

However they went, they went, some thirty or so. And not just to do exercise and to take in the sun, but on a pilgrimage, to meditate and pray. As the Rector explained, the tradition of the seven churches pilgrimage – pellegrinaggio delle sette chiese – began with Father Philip Neri from Florence, in the year 1551. On holidays he organised walks outside the city walls with church attendance and picnic. Later it became a fifteen mile pilgrimage walk. There are four Papal Basilicas among the seven churches: San Pietro in Vaticano (St Peter’s); San Paolo fuori le Mura (St Paul’s outside the walls); San Giovanni in Laterano (St John Lateran); and Santa Maria Maggiore (St Mary Major).

At each church one prays 2 of the 14 Stations of the Cross; then, after a short time of prayer, reflection and a look around inside, it is time to move on to the next destination.

This is just over the road from the seminary. Here, in Rome’s second-largest church, you will find the tomb of St Paul under the main altar. Destroyed by fire in 1823, it was rebuilt according to the original specifications. Above the tomb can be seen part of a metal chain used to bind St Paul when he was held prisoner before his martyrdom. The beautiful cloisters are well worth a visit.

The Church of St Sebastian is situated near the Catacombs of St Callixtus – about two miles, as the crow flies, east of St Paul’s. The statue of St Sebastian at the altar in the first chapel on the left is by Giuseppe Giorgetti. According to tradition, Sebastian was martyred towards the end of the third century during a persecution by the Emperor Diocletian. In addition to St Sebastian another martyr is honoured here – Pope Fabian, in whose memory the Albani Chapel was constructed. Fabian was Bishop of Rome in the first half of the third century during the persecution by the Emperor Decius. Both saints share the same feast day – 20 January.

It is quite a long walk from St Sebastian northwards towards the City centre and the Lateran Basilica of St John. The route goes through a pleasant park before encountering the bustling city traffic. Known as “Mother and head of all Churches on Earth”, this Basilica is the cathedral of Rome and therefore the seat of the bishop of Rome who, of course, is the Pope. The Basilica houses magnificent artwork, including the statues of the Apostles along the nave.  Pope Innocent III who approved the rule of St Francis, and the rule of St Dominic, is one of the many Popes entombed here and the High Altar is said to contain relics of a wooden altar used by St Peter. 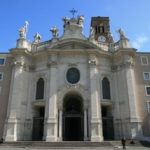 About ten minutes’ walk further is Santa Croce in Gerusalemme. A number of relics are on display inside, including fragments of the Holy Cross believed to have been brought back to Rome by St Helena, the mother of the Emperor Constantine. The church was originally the chapel of her palace. As for the name, Helena had the ground covered with soil from Jerusalem so the basilica itself is “in Jerusalem” in the sense that a “piece” of Jerusalem was moved to Rome for its foundation. 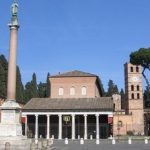 The Minor Basilica of St Lawrence Outside the Walls is one of Rome’s oldest churches and houses the relics not only of St Lawrence, but also of St Justin and St Stephen.  At the very back end of the church is the tomb of Pope Pius IX, who was beatified in 2000 by Pope John Paul II . Pius IX was the longest-reigning Pope in history, having been Pope for over 32 years, from 1846 until his death in 1878. 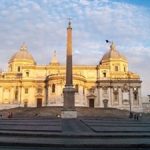 This is the oldest church in the west dedicated to Our Lady, built after the Council of Ephesus proclaimed her Mother of God in 431. The ceiling is a masterpiece of the Renaissance and the work of Giuliano da Sangallo. It is gilded with the first gold brought to Spain from the New World by Christopher Columbus. Under the High Altar of the Basilica are relics of the manger from Bethlehem. Pope Francis, like many Popes before him, has often come to pray before the icon of Our Lady called Salus Populi Romani. Tradition attributes the painting to St Luke, and it is certainly very old.

The most important relic to be found here is the tomb of St Peter. Around the year 66, the apostle was martyred on Vatican Hill, crucified upside down because he felt unworthy to be crucified in the same way as Jesus. Michelangelo’s Pietà is one of the most famous sculptures in the world, and is located just inside the entrance to the basilica on the right side. The Chapel of St Sebastian now houses the body of St John Paul II. He was previously interred in a simple crypt, but upon his being beatified his body was transferred to the chapel. The magnificent St Peter’s Square includes the ancient Egyptian obelisk, which contains a relic of the cross of Christ, and fountain of Carlo Maderno – all surrounded by Bernini’s colonnade. 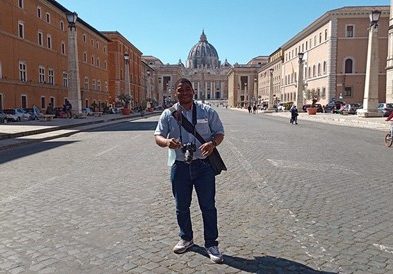 Here is fellow seminarian Philip standing in the Via della Conciliazione – strangely empty due to the lack of tourists, with St Peter’s in sight at last.  One upside to the pandemic is that we have been able to enjoy the beauties of Rome without having to share them with hordes of tourists. Nevertheless, we all fervently hope and pray that they will soon return, and look forward to a more “normal” pilgrimage next year.